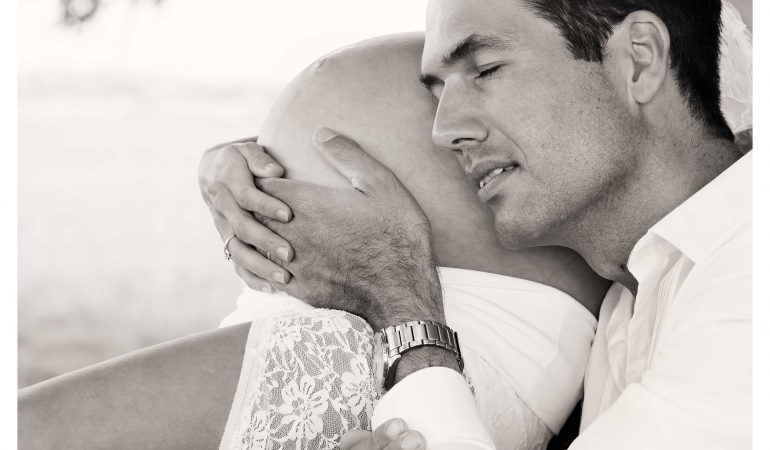 We’d had a lovely day with friends playing down at our creek on a hot summer’s day just around my due date. At about 6 o’clock that evening, I remember talking to a girlfriend mentioning that I had a bit of a backache similar to period pain, though I didn’t think anything of it. We went to my husband’s parents for dinner that night for a bbq, and we were all sitting around. A friend mentioned that my belly looked funny, and I looked down to see it was no longer round but instead looked like I was carrying a rectangular brick. Just another strong Braxton hicks, I said to everybody. We got home that night, and I went to the toilet and noticed some blood. Hmm, I began to suspect that something was starting to happen.

As usual, I put my first daughter to bed and then went to the toilet for a number 2. It was approximately 8.30 pm, and I still wasn’t sure if this was it or not. At about 9 pm, I let Rob know that I thought I was going into labour. I asked him to call the midwife and told him I would go lie down in our bedroom and prepare for what I thought would be a long night of labour. At about 9.40 pm, I had a significant contraction and felt my waters pop. I went and got a waterproof bed pad that we use for night-time toilet training for our daughter and went back to laying down.

That moment where you meet your baby for the first time!

During one contraction, I experienced a strange sensation of the baby’s head moving down into the birth canal. At the time, I wasn’t aware of what this meant in terms of what stage of labour I was in, as my first birth experience was completely different. I started to get quite uncomfortable and yelled out to Rob that I needed him to come and rub my back through the contractions. I was not aware of time; I was in a zone of simply breathing through each contraction. I still wasn’t as uncomfortable as my first labour, even in its early stages and figured I had hours ahead of me.

At about 10.10 pm, I was moaning and groaning through my contractions when Rob suggested we head into the hospital. I agreed. It was probably a good idea. As Rob began running around getting everything together and into the car, I suddenly had an urge to go to the bathroom. I thought it might just be another bowel movement trying to get out the way. I was on the toilet when Rob came in on the phone to the midwife. I called out that I didn’t know if I was pushing out a baby or a poo. 🤷‍♀️ It was such a different pushing sensation to my first birth. My midwife hearing me through a contraction, asked for me to put my hand down and see if I could feel the baby’s head. I was astonished to realise I could indeed feel the baby’s head.

My midwife told us we weren’t going anywhere and to call the ambulance. I remember the look on my husband’s face, as his body gave him a shot of adrenaline with the realisation that we were going to be having our baby, at home, on our bathroom floor. He wasn’t in a panic. He didn’t think there was any state of emergency. He was calm as he asked the midwife, “what’s the number for the ambulance?” It still makes me chuckle thinking about it. The midwife told him to put towels on the ground, so in a hurry, he grabs the towels on the rack from yesterday to put on the floor. I had to say, “honey, you’ve got to go get clean towels!” so he sprints off down the hallway to get some clean towels.

On my husband’s phone, we had the midwife, and on my phone, the ambulance. Realising that we would have this baby at home was wonderfully empowering. It gave me a sense of euphoria even. I completely trusted the process and my ability to birth our baby. As I began pushing on all fours during each contraction, we had some more funny moments. We had the ambulance officer telling me I needed to push as hard as I could and not to stop, while at the same time, my midwife was telling me to listen to my body and push only as much as I needed to. They were both on speaker. Our midwife and ambulance officer could hear the other giving contradicting instructions. I could hear in their voices their frustration as they tried to speak over each other to give me the right guidance. My body was doing what it needed to do regardless, without much input from me, so I just chuckled to myself and let them be.

Cleone meeting her sister for the first time. 💖

After about 10 minutes of active pushing, I realised I wasn’t experiencing the same tearing ligament pain in-between contractions as I had in my first birth! I was getting a 20-30 second reprieve in-between contractions just as I was supposed to! I was soo grateful! I don’t even remember being in pain during this birth. Yeah, sure, super uncomfortable, but not searing pain like I had in my first. I wasn’t drained and exhausted either. I was invigorated especially realising my body was doing this, all on its own, without the added pain from a tearing ligament. It was such a powerful euphoric moment for me, one that I will always remember.

When we called the ambulance, it was about 10.30 pm. I was pushing on all fours for about twenty minutes before the baby’s head was delivered. We finally had the midwife and ambulance officer agreeing on their instructions. Multiple times, they reiterated to my husband, “the baby will be slippery. Make sure you don’t drop the baby”! The baby’s head was out, but my shoulders were shaking, crying out that they couldn’t take my weight with me on all fours any more. I needed to change my position. I managed to shuffle backwards and use the towel rail and bathroom vanity to support myself upright. With the help of gravity and a final push, little Felicity Sylvie Jaques was born on our bathroom floor, caught by her capable daddy’s hands. My husband told me it was a girl, as he passed her to me through my legs, so I could sit down on the floor, hold my baby and marvel at what had just happened.

The ambulance officer on the phone told us the ambulance was lost and had been driving around our farm for the last 5 minutes trying to find our house. Rob phoned his parents, who also live on the farm about 1km away. “Guess what? You have a new granddaughter!” followed by, ” and can you find the lost ambulance and take them to our house, please”. I delivered the placenta not long after the birth, and another 5 minutes later, two ambulance officers arrived with me on the floor of my bathroom, holding Felicity.

We didn’t want to cut or clamp the cord straight away, but the ambulance officer told us that it was protocol, and his job was to at least clamp the cord following the birth. If I were him, I would have felt a bit cheated and sad to have missed out on all the action getting lost on the farm, so we let him clamp the cord. Rob cut the cord once we were at the hospital, about an hour later after Felicity’s first breastfeed.